It was 1958 and Pan Am introduced the first 707 trans Atlantic jet service,  President Eisenhower sent 5,000 Marines to Lebanon,  The United States launched its first satellite  and the New York Giants moved to San Francisco.    The latter is important because if they had stayed in New York, chances are good I never would have seen a Professional Baseball Game.  And I  never would have met Willie Mays.  At least not when I was 15, when it really counted!

Dad and mom took me and my cousin, Denny, to watch  the San Francisco Giants play at Seal Stadium on August 31, 1958.  I can remember everything.  The stadium probably wasn’t very big but to me it was the biggest stadium ever 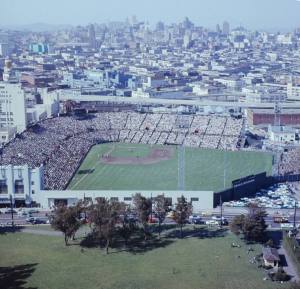 built.  And the crowd was probably pretty small by today’s standards, maybe 10,ooo, but to me it was huge, with the  best, loudest and wildest bunch of fans ever gathered for a sports event.  I was overjoyed with the thought of it all!  I’d spent the entire summer scoring every broadcast game, play by play, glued to the radio and occasionally the tv.  If there was a game that day, I had my home-made scorecard ready complete with line-ups, pencils sharpened and ready to go, and carefully recorded every play.  When dad walked through the door at night I went over the game with him,  play by play, every detail recorded precisely as it happened.

But this day I didn’t have my home-made scorecard and pencils.  No, today, I was a spectator at a Giants and Dodger game and boy was I proud to be there!    The one thing I remember most about that game was when Willie Mays hit his home run.  There were a couple home runs hit that day, but the only one I remember was Willie’s.  When Willie hit his

home run and he  threw the bat down,  and he began his trip  around the bases, it was an incredible sight to see.  He had the longest legs I had ever seen, and they stretched out, straight out, with every step, and I swear it only took him  12 steps to get around the bases.   I kept telling my dad, “did you see that,  did you see that?”  We (Denny and I) were jumping up and down .   I’ve seen pictures of Willie Mays running the bases since then and it doesn’t seem like anything spectacular, but back on August 31, 1958, it was truly a spectacular thing.

After the game, when the players left the ballpark, I leaned over the railing and yelled at Willie  and he looked at me and I did catch his eye for a split second (a very split second), and that was when I first met Willie Mays, at least in my mind, for a split second,  even though I’m sure  he would never remember this.  To a 15 year old kid back in 1958 , it was the making of a memory of a lifetime.  And that’s the way I’ll always remember it.  Me and Willie Mays, together at Seals Stadium, in downtown San Francisco, on August 31, 1958.