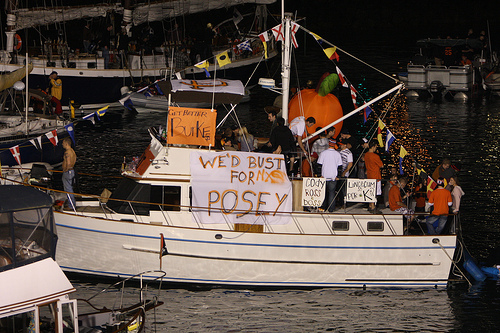 Geez, I know, it’s a really bad title, but it is almost Halloween.  I thought about “Giants Smoke Rangers“, but with all the San Francisco pot stories and ballot measures promoting the stuff right now, I didn’t like that one either, so here it is ~ SF Giants 9, Texas Rangers -0-.    First, let me say, this was a really close game.  Close until the 8th inning and then the bottom fell out of the saddle for the  Texas Rangers.  Up until that time it was a knuckle-grinder and anything could have happened with just one pitch and one hit.  As Aubrey Huff said after the game, the score was really  technically 2-0, and I agree.   It was a wild and crazy 8th inning.  Every game in the post season the

Giants have managed to come up with a different hero, so there’s not one really spectacular player that stands out about this team.  It’s been like that all year.  This time it was  Matt Cain, record breaking, torture-ending, masterful Matt Cain.  And it was also Edgar Renteria.   Edgar Renteria?  Who’s Edgar Reneria.   See what I mean?  No one’s ever heard of the guy, just like you’ve never heard of   Cody Ross or Juan Uribe or Tim Lincecum.   (Well, maybe Lincecum since he’s a two time Cy Young Award Winner!)   I don’t want to spend a lot of time on this game because, to tell you the truth, in spite of my euphoria for the Giants, I felt bad for the Texas Rangers.  I felt especially bad for Derek Holland,  the young pitcher they brought  in in the 8th Inning, who allowed 3 runs and 3 walks before they finally took him out.  I ‘m still 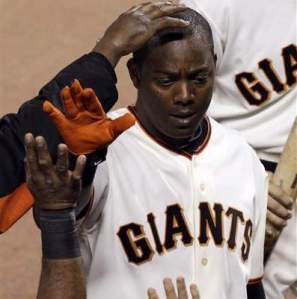 pondering why Manager Ron Washington left him in so long.  Bochy would have had him out after the first run.  The fact is they’re a much better team than what they showed last night and everyone knows it.  We’ve all been there with really bad games you just want to forget and get past and move on to the next.   But as the Rangers’ Josh Hamilton explained after the game, “Obviously they (Giants)  have the momentum right now, but it sort of felt that way even before the first game started”.   Next game will be at the Texas Rangers table with fan support behind them and I’m thinking it’s gonna be one of those low scoring, close games again.  That’s what the SF Giants are used to.   And besides, Halloween’will be here and gone soon and things can get back to normal.

(Note about Matt Cain.   After last night’s game, Andrew Baggarly, who’s a beat writer with the SJ Mercury News, said he asked Matt why he hadn’t tipped his cap to the crowd and their wild standing ovation for him, and Matt said “Can’t do it with a runner on base.  Just didn’t seem right.”   He had just issued a one out walk and there was still work to be done.  And that’s why he’s so admired and respected by his teammates and the  Giants fans.    Matt Cain, a real team player with a lot of integrity.  Does your heart good doesn’t it?  Just another example of a real class act!  GFBB)