THE SF GIANTS ARE FOR REAL ……. THE TORTURE’S OVER!

I had to play this great song one more time!  It’s much more appropriate to hear it as the World Series Champions!   The SF Giants won the 2010 World Series in 5 games, in grand fashion tonight,  beating the Texas Rangers 3-1, behind the outstanding pitching of  Tim Lincecum .   Here’s some possible headlines I considered: 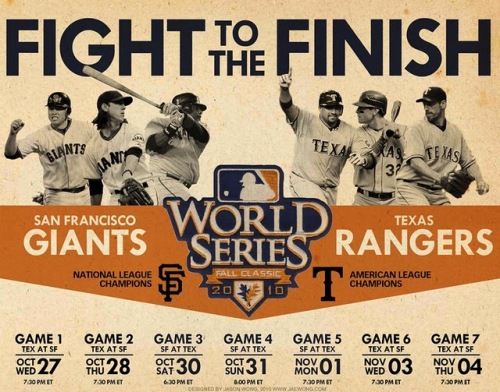 Six months ago I booked a 2 week vacation that begins tomorrow!  Can you believe this?  I mean who in their right mind would have thought the Giants could possibly be playing in the World Series in November?   I’ve been on pins and needles all week thinking the Series would go to 7 games, putting it into Wednesday and Thursday of this week, at which time I’d be on the road and in the air enroute to Panama!  But the Giants had other plans, (to accommodate me I’m sure), and decided to call an end to this ordeal in Arlington, TX, and come home tomorrow as World Series Champions!   The only problem is that the parade is going to be Wednesday 11AM in San Francisco, for those of you who’ll be lucky enough to attend.  Unfortunately I won’t be one of them.    So hats off to the SF Giants who’ve played their hearts out all season, and have been rewarded mightily with the Championship Trophy!   The details of this final game are outlined in related articles below so I won’t get into the nitty gritty but I do want to mention that Edgar Renteria who was mentioned in an earlier blog, and is considering retiring after this season, (say it isn’t so Edgar!) was named MVP of the Series.

A note to the Giants:  Whew what a ride and I enjoyed every minute of it.  But would you mind next year  maybe averaging more than 3 runs per game?  I’m getting too old for this stuff! 🙂