Posted on December 23, 2010 | Leave a comment
I thought this article was interesting probably because I’d already blogged on several of  the top 10 items as they happened( See my previous blogs on the Giants, Jim Joyce,  Stephen Strasburg, the Managers and the players salaries).   This article from Sports Illustrated was well written and I wanted to share it with you.   GFBB
Written by:  Al Tielemans, Sports Illustrated December 22, 2010 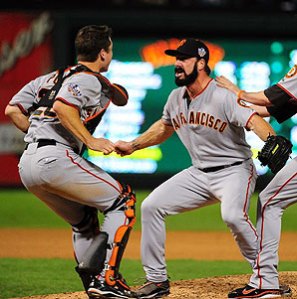 1. A title for San Francisco. The Giants won their first World Series since 1954, but their first since moving from New York to San Francisco for the 1958 season. After torturous World Series defeats in 1962 (losing Game 7 to the Yankees with the winning run on base), 1989 (when an earthquake struck before Game 3) and 2002 (losing a potential Game 6 clincher after holding a five-run lead with nine outs to go), San Francisco rolled through the postseason on the strength of dominant homegrown pitching and a sprinkling of long-awaited good fortune. The Giants secured six of their 11 postseason wins without scoring more than three runs. Six games out of first place as late as Aug. 22, the Giants’ 32-15 run to the title was an ode to joy for a yearning fan base. San Francisco ended the longest wait among current major league cities to see a World Series winner. That leaves seven with a title still on their bucket list: Houston (49 years), San Diego (42), Dallas (39), Seattle (34), Colorado (18), Tampa Bay (13) and Washington (6).

For a heartbeat or two, at least until umpire Jim Joyce made his infamous call at first base for what should have been the final out, Detroit right-hander Armando Galarraga threw the 21st perfect game in baseball history — the second in six days, the third in less than a month and the fourth inside of 11 months. And then it was gone. What might have seemed a travesty became an uplifting story for baseball because of the responses of two men. With a simple, wry smile immediately upon the call, Galarraga showed extreme grace under trying circumstances. Joyce, too, exhibited great sportsmanship. He quickly fessed up to his mistake and expressed profound sorrow for what he cost Galarraga. It may not go down as a perfect game, but its legacy will became even greater than if it had been.

3. The Year of the Pitcher. Where did all the runs go? Runs dropped by five percent from 2009, hitting an 18-year low of 8.77 per game. Batting average, home runs and ERA also were the lowest in at least 17 years. Compared to 10 years ago, in the height of the Steroid Era, baseball lost 3,663 runs and 1,080 home runs. Sure, the testing against performance-enhancing drugs has something to do with it, but most of it has to do with a wave of talented young pitchers and advances in training them.

4. Six no-hitters. Even without Galarraga’s gem, there were more no-hitters in 2010 than any season since 1917, including the second postseason no-hitter. Roy Halladay threw a perfect game in May and then a no-hitter in his first postseason start, joining Don Larsen as the only pitchers to throw a postseason no-no and, with his RBI single, becoming the first pitcher to outhit his opponents in a postseason game. The roll call of no-hitters also included Ubaldo Jimenez, Dallas Braden, Edwin Jackson and Matt Garza. 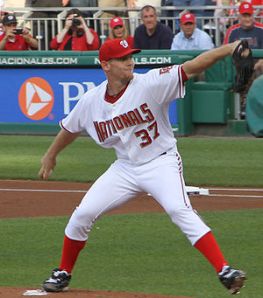 5. The rise and fall of Stephen Strasburg.

One of the most hyped prospects in history (his minor league starts were carried live on MLB Network), Strasburg immediately became the biggest drawing card in the majors since probably Mark McGwire and Sammy Sosa in 1998. He struck out 14 batters in his much-anticipated first game, one short of the all-time record for a debut, and 32 over his first three starts, setting a new mark. Fans flocked to ballparks and their televisions to watch him pitch. And then, on Aug. 10, in his 12th start, Strasburg blew out his elbow and eventually underwent Tommy John surgery. He should recover, but the phenomenon never will be the same.

6. Managerial madness: Of the 30 managers on Opening Day 2010, 12 of them were fired or retired, a whopping 40 percent turnover rate. None of the six divisions went unscathed. World Series-winning managers Bobby Cox (No. 4 on the all-time wins list), Joe Torre (5), Lou Piniella (14) and Cito Gaston (65) all left on their own terms. Those four managers retired after 93 combined seasons in the dugout, accounting for 7,559 wins, 42 playoff appearances, 14 pennants and eight world championships.

7. The deaths of icons. It seemed an especially harsh year for losing giants of the baseball community, especially when it came to the voices of the game. We lost Bob Sheppard, the public address announcer known as the voice of Yankee Stadium; the elegant Ernie Harwell; longtime Mariners announcer Dave Niehaus; and the beloved Ron Santo, who followed his great playing career with his enthusiastic if often plaintive calls of Cubs games. Moreover, the year saw the passing of Yankees owner George Steinbrenner, one of the most impactful stewards of the game; Sparky Anderson, a wizard of a manager; two Hall of Fame pitchers in Robin Roberts and Bob Feller; and, finally, Bobby Thomson, whose 1951 Shot Heard ‘Round the World grew to become perhaps the most mythic home run in baseball history. 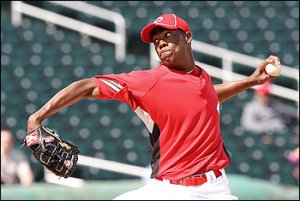 9. The fastest recorded pitch ever.

The season held its usual array of milestones and individual honors, including Ichiro Suzuki rapping out 200 hits for a 10th straight year; Jamie Moyer becoming the oldest pitcher to throw a shutout and breaking the record for home runs allowed; Jose Bautista hitting 54 home runs; and the coming of Jason Heyward and the going of Ken Griffey Jr. Underrated among the individual superlatives, however, was the freakish velocity from Reds rookie pitcher Aroldis Chapman. The left-hander from Cuba hit 105 mph on the radar gun, the fastest known pitch in baseball history. Chapman faced 51 batters and whiffed 19 of them.

10. Parity for (almost) all. While more teams than ever take turns bobbing to the surface with strong seasons, Pittsburgh is in a league of its own. The Pirates extended their record for consecutive losing seasons to 18 and it wasn’t even close. They lost 105 games, the most in baseball, and tied the 1963 Mets for the worst road record in a 162-game season (17-64). The Pirates’ consistent losing is remarkable because it has occurred in a time of expanded playoffs, greater revenue sharing and obvious parity. In just the past six seasons, 23 franchises have reached the postseason, including 11 of them that have won the 12 pennants in that time.