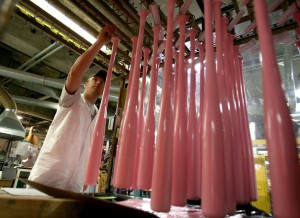 Occasionally I’ll find an article so unique I’m tempted to “plagiarise”!   This is one of those articles, but reprinted with permission from a really hard-working blogger who went to an amazing amount of work to produce this delightful piece for all of us!   Thanks to Mike Clair at  Old Time Family Baseball  for sharing this.

“There’s something wonderful about seeing a group of men finally stop the macho act and swing pink bats in honor of their mothers and to help the fight against breast cancer. (Plus, baseball players can finally realize how well pink complements their skin tones.) In lieu of a full game recap for the Mother’s Day games, I thought I would collect a master list of the players who did or did not use pink bats and finally see if ones love for their mother is a performance enhancer.

Is this just a small sample size, do better hitters choose pink bats more often, or is there a Mother’s Day boost? That will have to wait for next year to see if the numbers are straightened out, but here are some notes:

Final note, only players who used pink bats are listed. Consider this to be the master list of 2011 pink bat users as it will be updated if new information becomes available.”