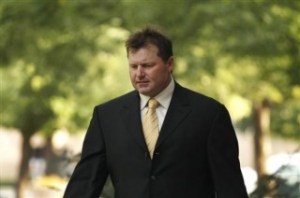 Wow!  Talk about change of events.  Take a look at this report from Craig Calcaterra’s blog just a few minutes ago.   The Twitter report he refers to is really interesting and is reported in real time.  Fascinating stuff in this day of electronics.

“UPDATE: On day two of what was supposed to be a long, arduous criminal trial of Roger Clemens, the judge has declared a mistrial. It’s over. For now anyway.  A hearing has been set for September 2nd when the entirety of the case will be revisited, but now everyone goes home.

The judge was plain as day when he ordered a mistrial. He said “it was caused by the government.”  How so: the government played a video in which the affidavit of Andy Pettitte’s wife was read, in she said she remembered Pettitte telling her that Clemens had admitted using steroids. The judge had specifically forbade them to play this video because the testimony was inadmissible as about 18 layers of hearsay.  That was a serious transgression. Inexcusable, really, and could have been caused by only (a) extreme incompetence; or (b) contempt for the judges’ order.

The prosecution will likely continue to pursue this case when the matter is revisited in September.  But at this point, between the Bonds’ acquittal and this blunder, I suspect that the fates are trying to tell the government something about the wisdom of pursuing high-profile perjury prosecutions regarding professional athletes and steroids.

UPDATE II:  If you’d like to see an excellent real-time account of what happened, go to Les Carpenter’s Twitter feed here, scroll down to the tweet that begins “Judge Walton is checking his Blackberry,” and read up.  Fantastic reporting by Carpenter. Totally captures how Twitter can be used in reporting this kind of story.

11:26 AM: Roger Clemens’ lawyer, Rusty Hardin, has moved for a mistrial.  And this just isn’t a case of Rusty being Rusty: the judge said that he will probably grant the request, ending this trial before it truly began.

Reports are still preliminary, but apparently the prosecution played a video to the jury with Andy Pettitte’s former testimony on it. Testimony that the judge has already ruled was inadmissible in this case. Hardin went crazy — you can’t practically ask a jury to disregard something they’ve heard, even though it happens often — and according to those in the courtroom, the judge had no small amount of sympathy for Hardin’s position.  Which he should, because such conduct by the prosecution is, quite frankly, inexcusable and is terribly prejudicial to the defendant.

There’s a recess going on now while the judge considers the mistrial motion.  If he declares a mistrial, we start all over again.  Likely many months from now.”