The Texas Rangers are leaving town with the Cardinals singing the blues …. St. Louis Blues that is after staging  a ninth inning rally that  won the game for them.  Final score:  Rangers 3 – Cardinals 2.   Well for sure I can’t use the 2010 Game 2 as a blog opener this year.  Last year the Giants shut out the Rangers 9-0 in Game 2.   Entirely different game this year.   For one thing I just couldn’t get enough of the Elvis & Ian dynamic. Elvis Andrus and Ian Kinsler may be the best all-around double-play combo in the game.   At least tonight they were.   Pretty impressive stuff coming from the Texas Rangers.  I have to admit we have ourselves a real World Series folks. 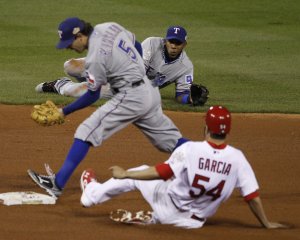 Highlight of this game?  In the 5th inning all eyes were on the Texas Rangers as Elvis Andrus  flipped the ball off the tip of his fingers to Ian Kinsler, forcing out Jaime Garcia on his way to 2nd, on a hit by the Card’s Rafael Furcal.  This is one of those plays that needs to be seen on a video and was the highlight of the game for me.   There were several antics like this during the game, but the Rangers waited until the ninth inning to score adding to the anticipation this world series is going to seven!   I love this stuff!

Since we’re leaving St. Louis and heading to Arlington, Texas for Saturday’s game, I wanted to share this picture with you.  For some reason I never really associated the Budweiser Clydesdales  with St. Louis.  But here they are in grand fashion posing for ooh’s and aah’s.

The Budweiser Clydesdales enjoying the game!