Game 5. Rangers Texas 2-Stepping all the way to Missouri! 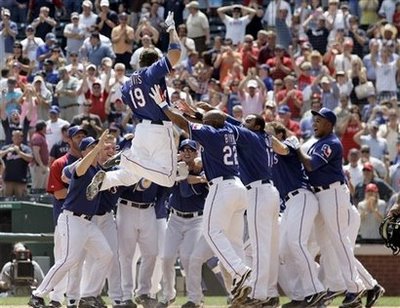 The Texas Rangers are flying high all the way back to Missouri, and without an airplane, so I’m told.   They beat the Cardinals 4-2  and are one game away from winning it all!

Here are some excerpts from a  pretty good ditty on the game  in case you haven’t seen one of the hundreds out there.  This one’s from the Huffington Post ;

“ARLINGTON,Texas— Mike Napoli was dialed in, no matter who he was going to face.

A charmed season for Napoli and the Texas Rangers got even better Monday night, thanks to a most unlikely twist – a bullpen telephone mix-up.

After a dropped ball and a dropped call, of sorts, loaded the bases in the eighth inning, Napoli delivered a tie breaking two-run double that beat the St. Louis Cardinals 4-2 and gave Texas a 3-2 edge in the World Series.

The Rangers moved within one win of capturing their first crown, which they can do Wednesday night in St. Louis.

And the Cardinals’ approach? Maybe get a smart phone, or perhaps next time they should try texting the bullpen.

Napoli’s go-ahead stroke came off Marc Rzepczynski, right after a potential double-play ball slipped away from the St. Louis reliever, causing manager Tony La Russa to put his hands to his head in exasperation.

La Russa said he called down to the bullpen earlier in the eighth and wanted Rzepczynski and closer Jason Motte to get ready. Instead, bullpen coach Derek Lilliquist heard only Rzepczynski at first. La Russa called again to ask for Motte and this time Lilliquist heard “Lynn,” as in reliever Lance Lynn.

“I was more frustrated the double-play ball went off the glove and the fact we had numerous chances to add runs. That’s probably more frustrating,” La Russa said.

“The other part just happens. I mean, its loud down there, and sometimes you call down there and you have to wait until the crowd and a guy gets up late. I mean, this is not unusual,” he said.

“He wanted Motte going easy to back Zep up and I thought I heard Lynn. It transpired from there,” he said. “It’s basically miscommunication. It was loud. A lot of places are like that. The phone is as good as any phone anywhere.”

The right-handed Napoli, meanwhile, was set to face the left-handed Rzepczynski with the one out and the score 2-all.

“I didn’t really see anybody warming up in the bullpen, so I kind of figured I was going to face him,”Napoli said.

“Just trying to get something to the outfield, you know, get a sac fly, get that run across the board,” he said. “I was trying to stay short and I got a pitch I could handle over the middle of the plate and put it in the gap.”

After Napoli put Texas ahead, the slugging catcher capped off his night of double duty by throwing out a would-be base stealer in the ninth as Albert Pujols struck out.

“Pujols is going to put it in play, he’s a good contact hitter,”Napoli said, “and they were just starting the runner, 3-2. As soon as I got it, I just got rid of it and put it on the bag.”

Texas can wrap it up in Game 6, with Colby Lewis facing Jaime Garcia. The weather forecast for Busch Stadium is daunting, calling for rain and temperatures around 50.

If the Rangers eventually do win it all, the Texas fans who stood and chanted Napoli’s name may forever remember his two-run hit.

If the Cardinals lose, there’s no doubt which play will stick with La Russa for a long, long time.

It was tied when Texas put runners on first and second with one out in the eighth, and Rzepczynski was summoned. David Murphy followed with a bouncer back to the mound, a possible inning-ending double play in the making.

But the ball appeared to glance off Rzepczynski’s hand and trickled harmlessly away for a single that loaded the bases. In the dugout, La Russa immediately threw his hands to his head, a true “Oh, no!” moment.

Napoli, who came close to a three-run homer in his previous at-bat and hit a big homer in a Game 4 win, sent a drive up the alley against the pitcher with the nickname “Scrabble.” The double off Rzepczynski sure spelled good things for Texas, with the excitable Washington waving the runners around from the dugout.

Darren Oliver earned the win and Neftali Feliz closed for his second save of the Series and sixth of the postseason.

Later, it became a battle of the bullpens and Texas prevailed.

Octavio Dotel gave up a leadoff double to Young in the eighth, struck out Beltre and intentionally walked Nelson Cruz. That left it up to Rzepczynski, and the game quickly slipped away.

La Russa appeared stunned by the turnaround. Later in the eighth, because of the mix-up, he brought in Lynn and had him issue an intentional walk to the only batter he faced. Motte eventually ended the inning, but it was too late.

Pujols drew three intentional walks, including a pass with two outs and none on in the seventh. The St. Louis slugger then nearly used his legs to put his team ahead.

Pujols was running hard on a 3-2 pitch that Matt Holliday hit for a single to left-center. Pujols chugged around the bags and third base coach Jose Oquendo initially waved him home, only to put up a late stop sign.

Would Pujols have been safe on shortstop Elvis Andrus’ wide throw to the plate? Maybe. But it became moot when Berkman was intentionally walked to load the bases and David Freese flied out against Alexi Ogando.”