Tonight the St. Louis Cardinals took it to the Texas Rangers in good old-fashioned Missouri “show me” style as the Cardinals won in 11 innings by a score of 10-9.  And “show me” they did. 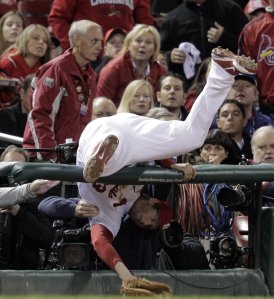 A lot of words were written, and, completely unregrettably, a lot of words were erased. The Rangers may well win their first-ever World Series in Friday night’s Game 7, but they did not get the job done on Thursday, as they lost what was easily one of the most absolutely amazing baseball games ever played. The last day of the regular season was memorable because it brought three games and a pair of historic collapses together at once. This night was memorable because it condensed all that into one game, and that game was Game 6 of the World Series.

And for the first time in nine years we’re all getting our money’s worth at the World Series.  This year we’re getting to see the 7th Game …. and if its anything like the first six we’re  in for a real treat!    And good luck to the St. Louis Cardinals and Texas Rangers, worthy opponents they are.   I can honestly say this has been one of the best World Series I’ve ever seen … can’t wait to see what these two great teams have in store for us tomorrow!