Last week the sports world was shaken by an announcement about illegal, immoral, unethical, sickening and a zillion other adjectives you could use to describe activities  that have been allowed to exist while the powers-that-be looked the other way.  And then yesterday another college has come forth with a similar situation.  We’ll just have to wait and see how many more are involved. 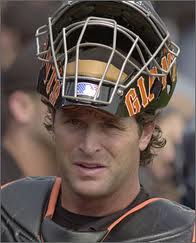 Mike Matheny as the Giants Catcher

So last night as I was getting ready to shut down for the evening I caught a headline that had crept into my blogosphere:  “Mike Matheny to Become New Cardinals Manager.”  Did I read this right?  How can this be?  I was thinking about the popular catcher the Giants signed to a three-year contract back in 2004.  In his first season with the Giants, Matheny won not only a Gold Glove Award but also the coveted Willie Mac Award given for spirit and leadership.   But the next year was not so kind to Mike as a series of foul balls pummeled his catcher’s mask resulting in a serious concussion that eventually ended his playing career.   I’d heard he went back to St. Louis where he’d played previously and was hired as a consultant or adviser or something.

There’s a ton of stuff out there this morning talking about 41-year-old Mike Matheny, the youngest manager in Major League Baseball.  That he has been signed by the World Champion St Louis Cardinals to fill the shoes of veteran manager Tony La Russa,  who retired only two weeks ago, speaks volumes not only about Matheny but about the St. Louis Cardinals organization.  It’s no secret how I feel about the Cardinals as evidenced by my inability to refrain from gushing over them these past few months.

When a player ends up with career-ending injuries such as what happened to Mike Matheny in 2006 and bounces back to the top of his field less than five years later you have to at least consider that maybe God does work in mysterious ways.  That this might be offensive to some really doesn’t concern me….. the God part I mean.

What does this have to do with the previous week’s horrendous headlines in the sports world you ask?  I think we’re all looking for heroes and when we get an inkling that maybe we’ve found one, just one, anyone,  it’s pretty darn heartwarming.   Well they’re out there for sure and some of the articles below will confirm this.

To get into the nitty-gritty of the St Louis Cardinals decision to hire Mike Matheny as their new manager you can refer to the related articles below.

I’m inspired.  The sun’s shining today in California and I can tell it’s going to be a  great day!   Don’t you just know it?