Capitalism Alive and Well in Baseball!

Last week I was perusing the San Francisco Giants website looking for tickets.  I  settled on two $46 tickets in the Premium Lower Box section, went through the hoops and hit the button only to find that the $46 tickets were now miraculously $150!   Here’s the Disclaimer that was shown on the page:

“Market pricing applies to all tickets.
Rates can fluctuate based on factors affecting supply and demand.  Lock in your price and location today!”

What the heck is that all about?  I mean if you list something for a certain price shouldn’t that be the price you pay for it?   I’m just as much in favor of capitalism as the next guy, probably more so, and I’m not an attorney,  but shouldn’t this be considered false advertising?

I understand having different prices for different games.  For example,  a June 4th game between the Giants and the Dodgers is priced at $56 for a lower box seat but a game on August 3 between the Giants and the Padres is only $32 for the same seat.   I get it.  Nothing wrong with that.  But to buy a ticket advertised at a specific price and then find out “at checkout” that it’s three times the price you agreed to pay for it 10 seconds ago?  I don’t think so.  I wonder if other teams are doing this.  Ticket prices  should be published at the beginning of the season and remain the same throughout that season, or at least until you get a chance to click the purchase button. 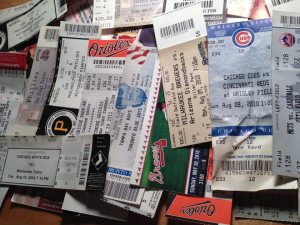 Needless to say, I cancelled the order I was working on and instead I’m flying down to San Diego in June to watch the Padres and Rangers at a price we agreed upon.  Okay, I realize with the air fare, hotel, meals, etc.,  it’s going to cost me a fortune.  But this is a protest purchase you know?  And it’s the principal of the thing.  I mean how many times do I have to keep paying for Zito’s salary?  Enough already.

One bright spot in the week.  We received an email from the Oakland A’s a few weeks ago offering $12 Field Level tickets on Mother’s Day.  And that’s exactly what they cost.  These were great front row seats, beautiful weather, friendly fans, and extremely friendly vendors and staff, and a beautiful pink rose to boot!  Needless to say, we’ll be back.

And we’re flying to Seattle and attending a Mariners game week after next.   If this is perceived as being disloyal, so be it.  I love my San Francisco Giants but I love baseball even more and I’m going to the games one way or another.

Like I said, it’s the principle of the thing.