“Safeco Field” ~ Who Does the Mow Job?

I just returned from an Alaska cruise and was perusing the photos I took.  One of those special shots that really stood out had nothing to do with the cruise.  In fact, it was a photo of  Safeco Field, taken on Friday night, May 25, 2012, before the cruise and during a game between the Mariners and the Angels. 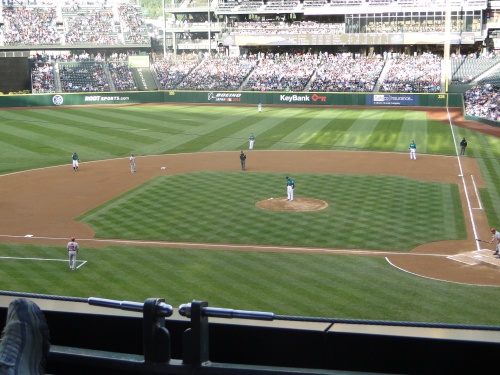 Take a look at this picture.  What prompted me to even take this shot was the unusual designs all over the field.  In just this one picture, you can count over seven different diagonal directions the field was mowed.  What I really want to know is how long does it take the groundskeeper to mow the darn field, all of it, and what kind of equipment does he use to mow it with?

Okay, I know, it’s a pretty lame question, but I just thought the field looked really great and wanted to share it before I fall into bed fast asleep.  It’s been a rough week, having spent a good part of it tossing around my cabin with patches on my ears, bands on my wrists, and frothing at the mouth from being sea-sick.  Our poor captain had to face headwinds of 42 knots while sailing at 20 knots.  I hope I got that right.   Knowing about knots is not my forte.  Alaska’s a beautiful state but next time I might try the Trans-Alaska Highway just to be safe.

As for Safeco Field and the Mariners ~ they played a great game and were ahead until the ninth.  I don’t know, maybe they took just a little too long to admire the field instead of focusing on the game and old Albert what’s-his-name.  I know that’s what I was doing.