I don’t know about you, but I’ve seen Buster Posey on a lot of interviews and he’s a really nice guy.   The impression one might get from watching this commercial is that Buster’s kind of a self-centered jerk, which he isn’t.  So I’m wondering; 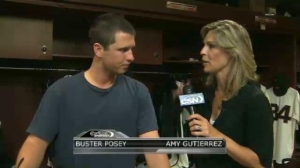 To tell you the truth I’m not a huge ESPN fan (still a little testy over the 2010 World Series treatment they gave us Giants fans) and this little spot doesn’t help much.  I’d like to see something that represents the true Buster Posey;  something like what Amy G.  does on her “Buster Knows Squat” series.

I guess we’re all a little protective of Buster Posey here in the Bay Area.  I hate to say it but I’d almost rather see him doing some of those Joey Mauer commercials, you know, the Head & Shoulders thing.  Not that he has dandruff or anything but it would make him appear more like the really nice guy he is. 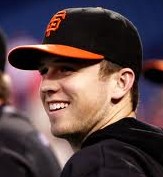 I mean Joey gets to smile in all those shampoo commercials, and I’m sure Buster has just as much to be happy about as Joey.   Seeing nice guy Buster Posey laughing and smiling on a national TV commercial after all he’s been through.  Now that’s a commercial I’d really like to see.  How about it ESPN?