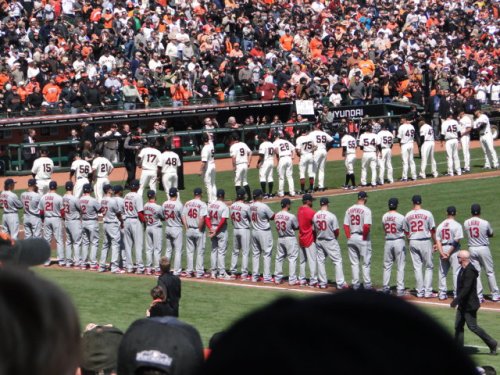 And then again, on November 14, 2011, I published a blog about the young, new Cardinals Manager, Mike Matheny, who had left baseball some five years earlier as a promising catcher with the SF Giants after sustaining a series of concussions.  He’d just been named as General Manager of the St Louis Cardinals and he was my new hero.  Here’s a link to that post “Mike Matheny ~ Leading by Example.”

So there’s just a little bit of irony here as I’m settling in to watch the first game of the race for the 2012 National League Pennant between the SF Giants and the St Louis Cardinals.  Who knew?  I’ve been anxiously awaiting this series which I projected without a doubt would be  between Cincinnati and Washington. But the  Giants and Cards have this way of sneaking in and surprising everyone and now they’re the contenders.

“Calm & Cool as a Cucumber”

But, seriously folks, there’s no dilemma here.    My home team is the San Francisco Giants (I’m a huge fan), and I really love those Cardinals.  And like many true blue baseball fans,  I just love to see a really great game no matter who wins and I think I’ve recovered enough after the 2010 World Series to be able to handle this ~ calm and cool as a cucumber.