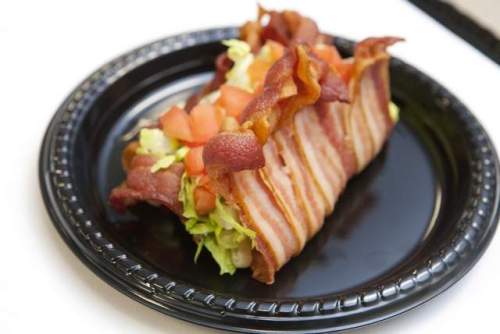 That’s right folks!  The newest ballpark food just won a competition beating out “The Bad Joke”, a corn dog covered in cheese with two strips of duck bacon on a bun.   I found this AP article  posted by Craig Calcaterra on HardBall Talk .  Previous winners of the food contest include Chicks with Sticks and the Declaration of Indigestion. They’ve since been retired from the menu.  I wonder how long this one will last? 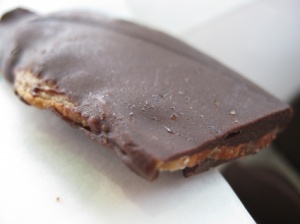 Okay, I know.  I’m making fun of it, but to be honest I’m heading to the kitchen to duplicate it.  Here at the coastal resort town of Santa Cruz one of the favorites is “chocolate covered bacon” and “candied bacon chocolate chip cookies” run a close second.  Looks pretty darn good from here!

So all I can say is,  Bacon lovers everywhere ~ unite!  And don’t knock it until you’ve tried it.  I  mean, really, isn’t everything better with bacon on it?