Hall of Fame Voting ~ Some Writers Don’t Deserve the Privilege 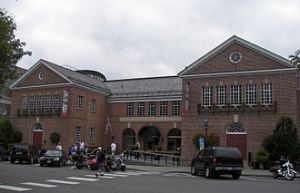 Interesting article yesterday at Seamheads.com,  written by John Baranowski.  It goes deep about the history and inner workings of who makes it to Cooperstown and why.  But what I found interesting is that all of the BBWAA writers can vote – even though some of them haven’t written on the subject for years.  He’s proposing that Announcers and Broadcasters be added to the list of those who can vote.  Thinking about the ones I listen to on a daily basis, it seems the most logical of logical ideas.  I mean, who knows more about the history of most all ballplayers than those who are talking about it and watching on a daily basis – some for the past half century.

Baranowski also casually mentions the idea that fans might  be given a shot at voting, noting they could probably do just as well as those who are currently voting. Personally, I hope that never happens.  Human nature being what it is, I fear a huge popularity contest.  Those cities with huge fan bases will be sending the most Hall of Fame Inductees and that’s not what it’s supposed to be about.  In my humble opinion, of course.