Josh Hamilton was named MVP of the American League Championship Series as his Texas Rangers whooped the New York Yankees into submission yesterday and grabbed the AL Pennant for the first time in their long history.  When he was asked about the award you couldn’t help but be impressed.  Here’s what he had to say:

“I love my teammates. I love them so much. Any of these guys could have gotten this award. I’m happy to have them. At the same time ,  I don’t want to talk about myself, I want to talk about them!  WE are the reason we’re here. The chemistry on the team is something like I’ve never known anywhere.  All the guys love each other and we support each other.”

Texas Rangers on winning the ALCS

Manager Ron Washington said basically the same thing, acknowledging this was the best group of players he’s ever worked with.   The Texas Rangers chemistry among each other seems to be contagious.   Most would agree that the players on any team have to get along with each other, maybe not “like” each other but for sure they have to get along.  Sometimes that promotes a winning team and sometimes not, but for sure these guys seem to really and truly “like” each other.  This  is evident in all the clubhouse interviews, on the field rapport, and articles written throughout this year.   I don’t know very much about the Texas Rangers, but I have to be honest here,  you can’t help but like these guys,  each and every one of them!

I decided not to write about all the great plays and statistics from this series.  They were impressive and you can read all about them in the “Related Articles” below.   But if you read my earlier blog about the Yankees and their tea party mentality, you gotta love these guys.   This is the first time in their history they’ve won a Pennant and it does my heart good to see a bunch of guys whooping and hollering and jumping around like they really, really appreciate being here.  Whatta series and what an accomplishment!   Great win for the Texas Rangers.  They deserve it!

Ho Hum……Yankees Won. Care for a cup of tea?

the Yankees beat the Twins 6-1 Saturday night to complete yet another three-game sweep of Minnesota and return to the AL championship series.    Once again,  New York Yankees 6 and Minnesota Twins-1.   Take a look at this video and you’ll see the reason behind the Header’s obvious sarcasm:  (Be patient, it takes a minute to load)

I watched it live as it happened and thought how utterly bizarre ~ the players are walking off the field, chatting to each other, an occasional smile and wave to the crowd.  In the first few scenes some of the managers are immediately walking down the steps to the clubhouse.   I envision white tablecloths set out with tea and crumpets being served.  Okay, so I think the Yankees are spoiled.   Or maybe they’ve just won so many times they expect to win again.  No big deal.   Well, you know what?   This is a big deal!  Four more wins and they’ve won the Pennant.  And another four wins they win the World Series!  Ye Gods man!  This is serious business!    I searched for some photos of individual players and found the same thing.  Might as well been wearing their Sunday-go-to-meeting clothes and bowing to the crowds.   I’m 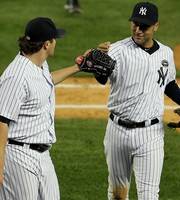 pretty darn sure of one thing though.   If the tables were turned and this were the Minnesota Twins with a 6-1 win over the Yankees, or over anyone as far as that goes, at the end of the game, when that last out was made,   there would have been 25 Twins out on that field acting like a bunch of 10 year olds and caps would have been flying all over the place.  And I would have been cheering right along with them.   It’s not that I’m unhappy the Yankees won.  It’s just that a little enthusiasm would have been nice, you know?   Kinda of like it might have been a surprise to them too and then trying to engage the crowd into their little celebration would have been really, really nice!

Okay, I’ll be honest, there’s another way you can look at this.  Could it be those dang Yankees were so sure they were going to win, it didn’t even cross their minds they should look and act like complete fools to pretend they were ecstatic about

something they knew was going to happen anyway.  And could it be this is the way “professionals” are supposed to act?   I’m just saying,  no one’s had more experience at being winners than the New York Yankees.  Perhaps that’s the way it’s supposed to be.   Tea and crumpets anyone?