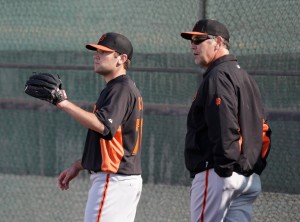 Last night, during the LA Dodgers batting practice, the SF Giants manager Bruce Bochy called his son, Brett, from the bullpen to the mound. It was the first time this has happened in the history of the game, according to the announcers. And it was emotional. Maybe not so much for the father-son pair, but for the fans and teammates and, for sure, this blogger. Brett Bochy was at spring training this year and eyes were on him as would be expected. I never really followed his progress but like most fans hoped he would make it. And that’s true for most rookies. We cross our fingers and toes when they step onto the field and hope they make it, do well, make mom and dad proud. The Giants have had several situations of that exact thing happening this season and it’s special. Just like last night was special. Brett Bochy proved he can hold his own despite the fact his dad’s a major league manager. Good for you kid ~ and good for dad too!

Posted in A1 Baseball