On Wednesday, August 1, 2012,  the home plate umpire for a minor league game between Daytona and Fort Myers in Florida ejected the  guy in charge of music from the ballpark.  Not only did he eject him from the ballpark but he demanded no more music or public address system announcements be made for the remainder of the game.

The  cause of this heinous infraction?  The music being played over the PA system was  “Three Blind Mice”, after what some, and obviously the DJ,  considered to be a questionable call.   And even though the umpire’s actions might seem a little drastic, there is a precedent for this and “Three Blind Mice” does have a definite history in Major League Baseball.

Consider this.  Back in 1941 the Brooklyn Dodgers had a somewhat volunteer band made up of fans that paraded around the stadium during the games playing fight songs, charge songs, and doing the regular things that pep bands do to inspire the crowds.  Not that the Dodger fans needed inspiring.  And when, in the minds of the fans and the band, an umpire would make a questionable call the band would break out into “Three blind Mice” much to 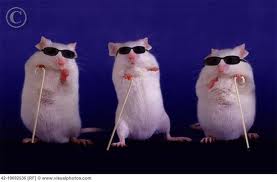 the thrill of the wild and rowdy crowd.  Ebbets Field probably only had an average 5,000 fans at the park back in those days, but it sounded like twice that many as the noise from the stadium was loud and intense.   Rumor has it that the practice continued  until the National League added a fourth umpire to the previous crew of three, rendering the three mouse ditty passe’.  But in reality, the league office ordered the team to stop the practice, likely in response to umpire antagonism and threats of a walk out  related to the unruly crowds inspired by the song.

This probably wasn’t the case last Wednesday in Daytona Beach, Florida, but you never know.  There is such a thing as respect you know?  Just saying …..a one – a two – a  three