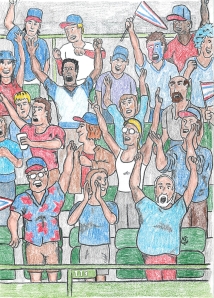 For no particular reason other than these are  guys that I like and have pretty good stats to boot, and probably because they’ve had the most  game-day exposure on network television, I submit the following National League (because I’m supposed to) choices:

1.  CONNIE MACK AWARD  (Top Manager).  For the life of me I still can’t figure out why Bruce Bochy hasn’t won this award or really even been nominated  for 2010 or 2012 when he so ably brought his team to the World Championship both years.   I mean he by-passed GO and  lead those Giants  straight to the top.  Oops, sorry, got carried away because now it’s 2013, and my choice for Top Manager is Mike Matheny, St. Louis Cardinals.

2.  WILLIE MAYS AWARD  (Top Rookie).  Yasiel Puig.  And not just for  his amazing stats, especially that first week, but I have to consider his entertainment value.  He was benched a few times due to his behavior on the field, but you have to attribute most of his training, or lack thereof, to being raised on Cuba baseball.   When I watch him play I’m not sure what training he’s had because he appears to just have incredible raw talent that needs to be cultivated and refined.  I’m sure it will come.   In the meantime, he’s just a lot of fun to watch.

3.  GOOSE GOSSAGE AWARD (Top Reliever).  I had to look over everyone’s stats for comparison and it looks like there is none, or, at least, very little.  It will be interesting to see if Brian Wilson contributes as a Reliever next year or makes the cut as a starter, but, in the meantime, Craig Kimbrel for those reasons just listed.

4.  WALTER JOHNSON AWARD  (Top Pitcher).  And the winner is, has been and probably will be again in the future, Clayton Kershaw.  I love watching this guy pitch and he rarely disappoints.  My favorite pitcher is Madison Bumgarner because of his calm, cool and collected demeanor, (at least on the mound!) much the same as Kershaw.  My guess is he’ll end up third to Kershaw’s 1st place in the Cy Young vote.

5.  STAN MUSIAL AWARD  (Top Player).  And the winner is ……once again, Clayton Kershaw.  I love this guy!  Based my vote on gut feeling and sentiment and lots of stats.

I know, not a lot of depth, statistics and comparisons here folks.  Much like my blogs.  Strictly from a fan’s viewpoint with the usual prejudices and sentiments.