Tag Archives: Manager of the year

Nationals’ Matt Williams selected as NL Manager of the Year

What’s going on with this Manager of the Year thing anyhow? Granted, it’s for performance BEFORE the Post Season, but, I mean, seriously even before post season you have to admit the only one individual manager that really stands out is Bruce Bochy, who everyone expected and l might add, hoped, that he’d choke same as they expected in 2010 and 2012. Either the BWAA voters are basing this on popularity or east coast bias or they’re completely incompetent. We can forgive them for giving Boche only ONE FIRST PLACE VOTE back in 2010. He took us all by surprise back then, but, seriously, it’s 2014 and we’re not in Kansas anymore folks. This award is a joke!!

Bruce Bochy: one of the best managers in baseball history? 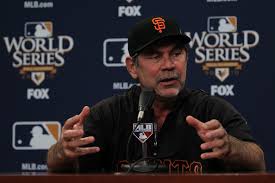 Something that’s stuck in my craw these past few years is not the fact that Bruce Bochy didn’t win Manager of the Year in 2010 and again in 2012, but that he wasn’t even runner-up. In 2010 he received ONE 1st place vote. And this was after putting together and working with the band of misfits later to be known as the 2010 World Series Champions.

It’s one of the reasons I don’t give much credibility to the members of the Baseball Writers Association who vote on the annual award. West Coast teams are rarely seriously considered by the BBWA for such awards since, the reasoning goes, their games are played after those who vote have gone nighty-night, the games being played late on the East Coast and all. And this isn’t just for the Manager’s award but for the others as well. The 2010 award did go to the San Diego Manager though, and that’s about as West Coast as you can go. But generally it hasn’t been so.

This article just might make a difference, at least it’s a start.