Sunday, 6/27/2010.    Got up early and trudged to the bus after a hurried continental breakfast this morning!   Our drive this morning took us to downtown New York City,  Queens to be exact, and to the beautiful Citifield Ballpark .

It was hot!  Don’t really know what the weather reports will read in the AM because hot is hot and no matter how I try to describe it, you won’t be able to feel the soaking wet shirts, swollen, puffy feet,  and wet hair and no place to escape from the heat.  Actually, it wasn’t even sunny most of the time, just a big overcast, but it doesn’t matter.  It’s that crazy humidity!   For those of you who’ve experienced this, no need to say anything, and for those of you who haven’t,  anything I say won’t be adequate.

But the game was great.  At least for the Mets fans!  Final score 6-0.  So for the first two games we’ve attended the home teams have won.  I want to comment on the Mets fans, and the Oriole fans too for

that matter, but especially the Mets.   They’re intense!   Part of the fun of being a baseball fan is people watching!   Watching the players, the coaches, the managers, ballpark staff and the fans.    Maybe it’s because this was a Sunday afternoon game, but I was touched by the number of families with young children.  And these kids were all decked out in caps, shirts, shoes and even some mitts, proudly showing their loyalty to their beloved Mets!   I think maybe the intensity is because they’ve lived in the shadow of the Yankees for so long 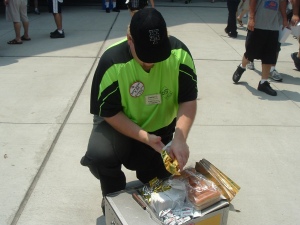 and are always having to prove themselves worthy opponents.  But whatever reason, they’re sincere and they truly love their team.  It was fun to watch and I was caught up in the atmosphere of it all!

Probably the highlight of Day 2 for me was the group trip on the New York MTA Subway system to Mickey Mantle’s Restaurant, downtown Manhattan!   Loud, noisy, scary and adventuresome!    That’s how I’d describe my subway

experience!  I can’t imagine daily commuting in this mannerand have a whole new respect for the average New Yorker who does.  Dan herded us like a bunch of cats and we finally got it, taking sometimes three tries to get thru the turnstiles.  Sounds simple enough but if you didn’t time it just right you had to go back, repurchase another ticket and start over again.   The system seems archaic in comparison to Boston and London’s, just my personal observation.

The food at Mickey Mantle’s was good.  Not great, but good, and you’d still have to give it at least a 3* rating  for the ambiance and great sports pictures and autographs that grace the entire facility.  Probably seats around 300 – but not nearly as full for a Sunday afternoon as I would have expected.  It was a real treat and I would have liked to spend at least a few hours just looking at all the pictures.    A lot of history and memories in this place!

It’s taken me longer than usual to write tonight.  I was caught up in the final innings of the Yankees/Dodgers game, which was Dodgers 6-2 when I turned it on and now find at the bottom of the 9th Mariano Rivera fanned 3 in a row and the score is tied 6-6 putting it into  overtime!    Yankees then go ahead and score 2 runs in the 10th and once again Rivera fanned 3 in a row to end the game with Yankees over Dodgers 8-6.    Fans were  loud and wild!   Don’t you just love baseball?  Down to the last pitch!   Sorry, I had to digress.  I’d written off the game as a Dodger win and I should have known better!      Tomorrow ……. Hall of Fame @ Cooperstown!