I “Stumbled” on this great post that lists the origins of all 30 Major League Baseball Teams.  It appears the Boston Red Sox hold the oldest named team dating back to the 1860’s, popularized by the Cincinnati Red Stockings from 1867-1870 and used by Boston’s National League franchise from 1871-1876.

But the actual team name origin that’s  with the same team is the San Francisco Giants, formerly the New York Giants, that dates back to 1885.

Here’s the 2012 update to our 2011 listing published August 27, 2011.  This comes to us compliments of USA Today.  If you’ll click the individual teams, you can access the individual players salaries.  It will be interesting to note the annual salaries of the teams that make the playoffs;  in other words, did they get what they paid for?  For example; the Washington Nationals have the best record in the Majors this year, but have the 11th Lowest Salary out of 30 Teams.   Salary Chart Linked Here

We Have a Winner!

Congratulations to David Wing from Three Rivers, Michigan.  Dave has won an  autographed copy of my book “Garlic Fries and Baseball: The Book” which is being mailed to him today.  This is our second contest in less than a year and both winners have been Detroit Tigers fans!  What are the odds?

Here’s the response I received from David this morning:

“I’m thrilled to have been selected as the recipient of your new book. My name is David Wing and am a big fan of the Detroit Tigers. My address is (……….) Three Rivers, Michigan 49093. Please feel free to use my name in any way needed.  Thanks again from an avid reader of your blog. Dave”

The contest was a drawing to celebrate this blog’s 50,000th view which occurred yesterday. The blog started only two years ago and we appreciate the response we’ve received.  Baseball fans are awesome and you Detroit Tigers fans are among the best.  Look back at our June 3, 2010, post “The Umpire ….. Toughest Job in Baseball” where I fell over backwards loving those Tiger fans.   And now with Justin Verlander the raves just keep coming.

So thanks again to all our subscribers and especially to David Wing.  We’ll do this again when we reach another milestone!

Here’s the 2011 update to our 2010 Major League Baseball listing published November 22, 2010.  This comes to us compliments of USA Today.  If you’ll click the individual teams, you can access the individual players salaries.  It will be interesting to note the annual salaries of the teams that make the playoffs;  in other words, did they get what they paid for?

Wow!  Take a look at this.  You won’t believe it.  This makes that Jim Jarvis call on the Armando Galarraga play look like play-doh!   Unfortunately, it’s another reason for the instant replay pundits to continue beating their drums.   I’m not a fan of instant replay, but I have to admit I sometimes wonder if maybe Selig might, just once in a while, override a call.  You know, like maybe once or twice a year?

The call was made by umpire Jerry Meals during the 19th Inning of the Atlanta Braves vs Pittsburgh Pirates game last night, giving Atlanta the win by a score of 4-3. The Braves’ runner, Julio Lugo, was clearly out as seen in the video and appears to be as surprised as the catcher was at the call.  I guess Jerry Meals wanted to go back to his hotel room and either sleep or eat a meal since it was already 2am in Atlanta.

The blog title’s a little skewed since I’m sure the runner thought the umpire made a fabulous call as did a lot of the  Braves fans.  It depends a lot on your perspective, doesn’t it?  Videos and some of the commentary  provided from D’Wizzle’s World, a Yardbarker network.

honestly I slept most of the day so was ready to go once we got there!  The park itself was set on the river and directly opposite the Steelers football stadium.  We could stand at the concessions and look out over the river.   Really great views!

This was the most accessible and user-friendly park to get around of all the parks we’ve been to so far.  Took about 5 minutes off the

bus to our seats which is pretty amazing when you compare it to some of the marathon walks we’ve been through!   As far as ballpark food goes, the Fermenti Bros sandwich lays claim to the best food at PNC and they’re probably right!   This sandwich sure makes carrying it back to your seat “easy”.   It not only loads the bread with lots of deli sliced roast beef, but also layers the coleslaw, condiments AND french fries on the sandwich.  No 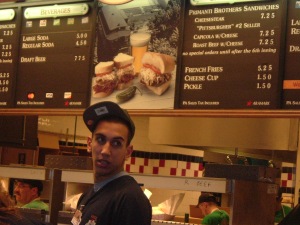 kidding!   And they were lined up to get it!   The Quaker State BBQ Chicken looked great but had an awful sauce.  Big mistake so I was glad I got the smallest order.  It pays to listen to the locals!    As far as the game went, Pittsburgh has one of the worst records this year, and the Phillies are doing great.  But we were all compelled to cheer for the Pirates which I wanted to do anyhow.  So it was fun to hear the cheers and enthusiasm when they pulled it out in the end.  They were ahead the entire game but it was one of those “you score – I score” games and was never really comfortable until the end!

This is a great ballpark.   The backdrop looking out from the 3rd base line toward Right Field is spectacular, resembling a Hollywood backdrop of high rise buildings that look super-imposed, not the real thing!    We arrived here at our hotel after the evening game at 1:30AM and leave 7AM for Chicago.   It’s now 2:45AM so goodnight all!  Next stop Wrigley Field in Chicago!