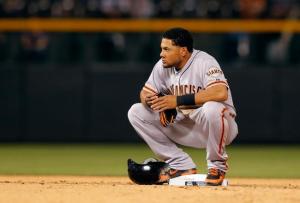 Melky Cabrera’s front and center everywhere in the media, but not in the SF Giants front office.  Matthew Pouliot on NBC’s HardballTalk wrote a convincing piece recently about the organization not allowing Melky to join the team after his 50 game suspension.  The suspension would be lifted about five games into the playoffs, assuming the Giants get there, and it’s looking pretty good they will.

I wrote a testy piece a few weeks ago and the title pretty much sums up my frustration with the mess, “Melky Who?  Who Needs Him?  Who Cares?”  But the fact is, Melky’s record prior to his suspension was  .346/.390/.516 in 459 at-bats.  The real question is what would his record be after the suspension?  There’s only one way to find out.  This would be a rest test for the argument that PED’s do or do not allow players to hit better.

If Melky were allowed to play in postseason and kept hitting like before, it could present a convincing argument that PED’s are not responsible for making a batter hit better as many have alleged.  Barry Bond’s argument was if 80% of the ball players were using steroids in the 90’s, why weren’t 80% of the ball players hitting better ~ a lot better?  Personally, I’d like to see this tested.  What could it hurt?  Bring Melky back and, if nothing else,  use him as a DH when appropriate.   I mean, the Giants had no qualms about bringing Guillermo Moto back a few weeks ago and that was after a “100 game suspension”, for a second offense, no less.

This blog has a sophisticated database ~ I found out the hard way   😦   So what do you think?  Should the SF Giants bring Melky Cabrera back to the roster after the 50 game suspension is lifted?   Your “vote below” means absolutely nothing.  I mean it’s not going to change the minds of the powers-that-be.  I’m just curious and I’m happy to share the results with you here.