There are no Constants in Baseball ~ It’s a Fickle Game 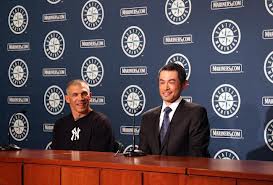 Ichiro’s been on my mind today.  I don’t even have to use his last name.  Everyone knows who he is.   It’s not really a surprise he’s leaving.  He’s been with the Mariners for a long time and we knew he was  destined for other things in the near future.  But I never thought in a million years he’d end up a Yankee.  Not that there’s anything wrong with that, but there’s just something so unsacred about the  idea of it all.

Back in 1962,  I was given an assignment in my business college marketing class to interview someone in business and to make a proposal or suggestion to them on how they could improve their business.   Most of my classmates chose their dad or another family member to interview.  I chose to interview the General Manager of the Portland Beavers, an AAA-Affiliate of the Kansas City Athletics.   I was 18 at the time.

I was obsessed with this project and spent a lot of time on it and the fact that I’d actually gotten the interview was more than my young years could fathom.   I knew before I made the trip to the ballpark what my proposal to the GM was going to be.   Attendance at the ballpark had been very low the past year and I thought it would be a great idea to have the organization offer a “Ladies Night” once a week,  with free admission to all the ladies.  I thought there was a good possibility it might not only get the wives there with their husbands but possibly the entire family, thereby increasing concessions also.

When the day arrived for my meeting with the GM I was really excited, not only about the interview but also of  maneuvering my way through Multnomah Stadium to the Administration Offices by myself,  with my very own written proposal in hand.   The manager was very cordial and listened with intent to my proposal and thanked me for my interest.   When the interview was over, it lasted about an hour, he gave me  complimentary game tickets  and invited me to keep in touch.  It was a wonderful day.  I got an “A” in Marketing that year.

A few weeks later, complimentary tickets in hand,  I invited some friends to attend a game with me and, honestly,  I felt like I owned the place.  I felt like a VIP and the experience is just as vivid today as it was 50 years ago.  The Portland Beavers maintained nearly a 103 year presence in that city but on September 6, 2010, they played their last game at the hometown park.  The city was making room for the Portland Timbers, an MLS  Soccer team.  Portland no longer has a baseball team.  The Beavers continue today in Tucson, Arizona, as a Triple-A affiliate with the San Diego Padres.

The point I’m trying to make is that baseball’s a fickle game.  There’s no constants  in baseball.  The managers change, the players change and sometimes even the hometown locale changes.    Usually we adapt, but  it isn’t easy. To tell you the truth I still miss Cody Ross.  He was with the Giants for such a short time, but while he was here his presence was huge. 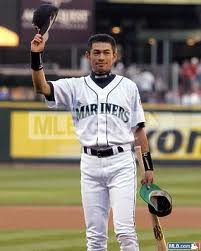 And for sure the Mariner fans are going to miss Ichiro.  You could sit in the nosebleed section of the bleachers in right field and, without hearing the announcer,  know it was Ichiro at the plate.   He had this way of holding his bat, butt handle  straight up as if he was holding a rifle with a precision periscope on it, sizing up where he was going to slam the ball with the next pitch.

Ichiro’s an artist.  And I’m going to miss him too.  Does this mean I’ll have to start watching the Yankees again?  If last night’s Mariner-Yankee game  is any indication, it could happen.  Baseball’s a fickle game you know.