Tag Archives: Sportsman of the Year

MADISON BUMGARNER ~ Sudden and Out of Nowhere?

Madison Bumgarner can add another accolade to his growing collection.  Sports Illustrated named him the 2014 Sportsman of the Year and with good reason.   But I’ll disagree with one statement in the article:

……his Sportsman candidacy was so sudden and seemingly out of nowhere …… 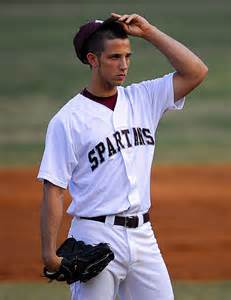 If you’re a San Francisco Giants fan, you’ll get this.   Affectionately known as “Mad Bum” he’s been on the fans radar since he was drafted  as a 1st round pick back in 2007 where he’d already made a name for himself.

One of my favorite quotes was back in 2010 when asked about being a rookie and pitching in his first World Series, Mad Bum said something to the effect “Well, I don’t know, I pitched in the High School State Championships and we won, so I don’t see how it can be much different that that.”  You’ve gotta love the humility and innocence of that statement.

In 2013, the North Carolina High School Athletic Association included him on its “100 To Remember” male athletes list, which included Michael Jordan, Carl Eller,  and Jim Beatty.

And this year Madison Bumgarner hit two grand slam home runs in regular season, and mid-season, at one point, had a batting average better than half of his teammates.  Another argument against the DH rule, in my hunble opinion of course.

Not bad for a country boy from North Carolina, but “sudden and seemingly out of nowhere” isn’t something San Francisco Giants fans would probably use to describe him.