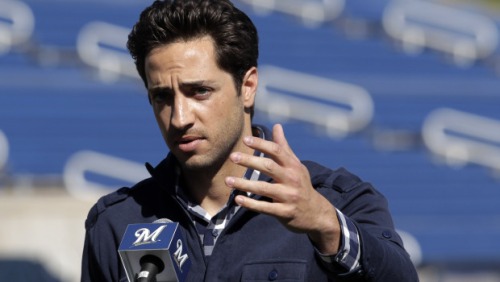 Ryan Braun Speaking at a Press Conference after his Appeal was upheld.

It’s not that he did the Peds …. it’s that he lied about it so very eloquently. He lied so well he should have been awarded the outstanding Thespian award of the decade.

I was totally taken in after that “poor little old me” speech ~ brought tears to my eyes.  How could they possibly say those awful things about him? Must be a conspiracy.  Poor dear.  See my proud post here.  “The Brewers’ Braun and Those Whinging Critics” published May 1, 2012

So much for blind faith huh?

After he admitted he lied, I wondered then and will always wonder, what the hell else does he lie about?  Who is this guy? We have a great group of guys in the Giants organization who support each other and stick together.  We don’t need a Ryan Braun.  It’s a lot about trust, you know? And we’ve done fine with our home grown talent. Let’s stick with them and let the chips fall where they may.

Hang in there Hunter Pence.  Were waiting for you!