An interesting article in “Reflections” this week by Steve Contursi.   He’s commenting on the emotions of  baseball player Wilmer Flores on being traded from the Mets, where he began his career, to Milwaukee, and the impact of trades throughout the industry. 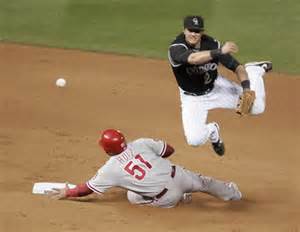 I’m reminded of this as I listened to Troy Tulowitzki’s account of how he found out about being traded last week.  Tulo had an affinity for the National League and for all intents and purposes had asked to remain there. Instead they not only sent him to the AL, but out of the country to Toronto. Not that there’s anything wrong with that, but he found out about it in the 9th inning of a game he was playing in, as they escorted him out the door.  Tulo surely deserved better than that.

Just another reminder that baseball is a business.  A huge business, subject to both the good and bad aspects of such and it probably won’t be changing anytime soon.  But it doesn’t stop the rest of us from empathizing with the guys.   After all, aren’t we helping to pay their salaries?     In a small sort of way don’t they really belong to all of us?   They deserve better, in my humble opinion, of course.