I’ve never been to Busch Stadium in St. Louis but since this blog’s supposed to be about ballparks AND ballpark food it just seemed  natural we’d want to highlight the fan favorite food of the World Champion St. Louis Cardinals. 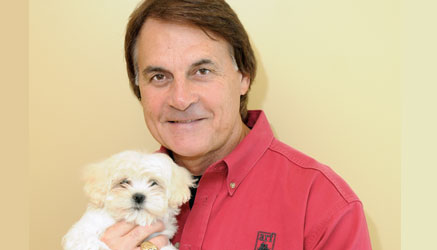 When I found out that Manager Tony LaRussa  is a vegetarian it brought back a memory from one of the baseball tours I took to Yankee Stadium.   After touring 42nd street, I ended up  with some marvelous leftover pastrami (that I hadn’t even began to touch) from an early dinner at  Roxy’s Deli.  There was probably a pound of pastrami left, wrapped neatly in aluminum foil, in a tidy little white bag that Jess our waiter so meticulously wrapped up for me.  I had no idea what I was going to do with it, but I just couldn’t leave it on the plate.  I mean it was a complete meal, untouched. 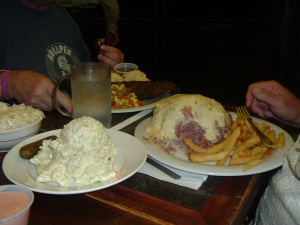 So we’re leaving the subway at the base of Yankee stadium and I’m approached by a young man asking for spare change, probably in his late 20’s, who appeared to be homeless.  I don’t know, just saying he “appeared” to be homeless.   I told him I couldn’t give him any money but I had a fantastic plate of pastrami fresh from Roxy’s Deli he was welcome to have.   He looked me in the eyes and said, “Sorry,  I’m vegetarian”.   I don’t know why it struck my funny bone, but it did and every time I tell the story it gets funnier.   Anyhow that’s the only correlation between my story and Tony LaRussa ~ the vegetarian thing.

It seems anything “cheese” is a fan favorite at Busch stadium.  According to Inside STLcom. Bush Stadium Food Review it makes sense. “Cheesy Pretzels. Cheesy hot dogs.  Hell, I’m pretty sure I’ve seen some guy put cheese on his cheese.  It’s not the quality; it’s the quantity.”  Here’s how Ryan Riggle, 32, from Fenton, MO, put it.  ” Nachos.  Not good on the surface, but a Cardinal tradition.   I don’t like these nachos at all. They are soggy, the cheese is bland and the jalapenos give me explosive bowel movements.  But in short, they are my favorite Busch Stadium food.”  Hmmm ….Well, okay then.

Ian Froeb puts it this way in his “100 favorite St Louis dishes” article:

First, let’s state the obvious: There is no good food at Busch Stadium. But baseball is essential to life in St. Louis, and food — greasy, fatty, overpriced as it may be — is essential to the ballpark experience. 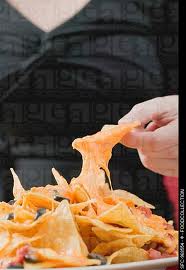 “For me, the safest bet are the nachos. Emphatically not the nachos with ground beef, which is squeezed out of a plastic bag into the steam table pan from which it is ladled. No, I’ll take tortilla chips topped with nothing more than “cheese” and jalapeños. How can you resist that velvety cheese product, its plastic sheen, its tang so generic that it makes a Kraft Single seem like the finest Camembert?
I always order an extra cup of cheese because I want to die young there’s never enough of the stuff to cover all the tortilla chips. Your mileage may vary.”

To be honest the best consensus I could come up with was the best food at Busch Stadium had to be  Nachos.   So here’s an actual photo of nachos at Busch Stadium!  Can’t you just imagine the gooey cheese sticking to your fingers as you try to cheese-up every little morsel of chips?  Happy ballpark eating!

One response to “Ballpark Food ~ Best at Busch Stadium!”